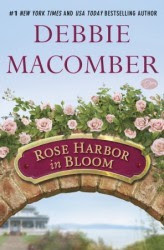 Rose Harbor in Bloom by Debbie Macomber
*May contain Spoilers*

I received this book as an ARC from Netgalley.

Here we are back in Cedar Cove at Jo Marie's Inn. Watching her cope with the loss of her husband, that she still can't quite accept, and learning to run the inn like a well oiled machine. She has a few guests coming in, Mary Smith and a family set to celebrate a 50th anniversary. All the while she has to contend with her snarky neighbor/handyman Mark and his attitude. One minute he's talking to her over coffee the next he's storming off in a huff.

Annie, one of the before mentioned guests of the inn, is in town to throw her grandparents 50th wedding anniversary. Six months before hand she had broken off her engagement to Lenny, a guy that thought that being faithful was an option. She keeps getting calls from him begging her to take back but she's resolute and tells him that is over. Her grandparents marriage is everything she wants for herself, except when they arrive with Oliver, the bane of her existence, they are doing nothing but bickering. Annie is floored, gone are the people that were loving and doting people she grew up with and are replaced with these mean people, that she doesn't know. Oliver is trying put the past behind them and get Annie to see him for he is now. Can he do that? Maybe, but Anne is going to fight him.

Mary Smith is a bit of a mystery. She's in Cedar Cove for a specific reason but you really don't find out what it is until almost the very end of the book. I really don't want to give much away. Mary is sick, physically you can tell, she's bald and she looks weary after the least bit of exertion. While she is there for a specific reason, she has another one as well, perhaps she'll look up her long lost love, George. He's defiantly the one that got away. When she gets a hold of him she finds that he is single and ready to see her again no matter what she looks like or where she is. Reluctantly she sees him and can honestly say that she loves him just as much as she did 18 years ago.

It was a great ride that Debbie Macomber takes us on. Just seeing Cedar Cove again is wonderful. Even had a few glimpses of the characters from the CC series. I am so intrigued by what is going on with Jo Marie and Mark. I can feel that something is going on there. I also am hoping that Jo Marie finally starts to move on with her life after her husbands death. A beautiful book that I am so glad I was given to read. Check out the first one and its prequel, or any of her other books. You won't be disappointed.