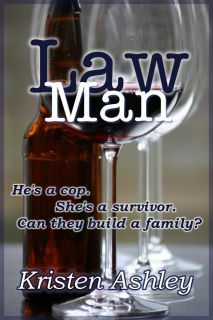 Four years ago, Mitch Lawson moved across the breezeway from Mara Hanover and she fell in love with the tall, good-looking police detective who had an uncanny ability to dress well even though he’s single. It was not a stalker kind of love; she knows she has no hope since Mitch is way out of her league. That doesn’t change the fact that he’s her dream man.

Then one day Mara’s faucet won’t turn off and she knows nothing about plumbing. Being a good guy, Mitch offers to help then he invites himself over for pizza. Mara gives it a go but finds herself running away from him (literally) on their first date, standing him up their second and then she runs into him (again literally) on her way to save her ne’er do well, criminal cousin’s kids who’d just run away from their ne’er do well, criminal Dad.

Suddenly, Mara finds she has on her hands the guardianship of two kids and a gorgeous police detective who’s willing to do anything to help out… including giving fabulous foot rubs.

But Mara knows who she is and where she came from and she knows Detective Mitch Lawson is better than her. Hot law man Mitch disagrees and his challenge is to convince Mara to let go of her past and he sets about building a family at the same time he finds he also needs to protect them all against known and unknown adversaries that would tear them apart. **

When you're told over and over again that you're worthless, that you're a nobody and people think you're easy just because of who your mother is, you begin to believe it. You even figure out a system to show how much better people are than you, your a 2.5, maybe less. Poor Mara is convinced that she's a 2.5 on a good day and the man you feel like you're in love with is a 10 or a 10.5 and he dates 7's, not 2.5's.

Mara is a good person, she works hard and now she's taking on her cousin's kids. They are so mistreated and she wants to get them away from that life. Enter Mr. 10.5 or Mitch Lawson. He lives in the same apartment building and he's been waiting for his chance with Mara, but she's so painfully shy. Every time he sees her she says hi and then looks down and walks away fast.

He's just being nice, that's the way he is. He works for the Denver PD, its his job to help people. It's the only logical conclusion that Mara can come up with for Mitch wanting to help and calling her sweet names like baby and sweetheart.

I loved watching Mitch show Mara that she's not where she came from, that she is worthy of his attention and of any positive attention. She had such low self esteem and through his love and hearing him she was able to rise above it. SO much more went on in this book but in the end the main thing that came out of it was a beautiful relationship.  I'm usually one that loves an epilogue but I thought this book would of been awesome without one. I did love seeing them in the future, but it just seemed rushed or not needed.

Seriously check out these books, the men are HOT HOT HOT.