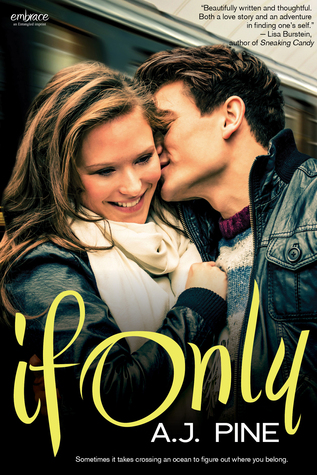 If Only by A.J. Pine

Sometimes it takes crossing an ocean to figure out where you belong.

It's been two years since twenty-year-old Jordan had a boyfriend—which means it's been forever since she, well, you know. But now she’s off to spend her junior year in Aberdeen, Scotland, the perfect place to stop waiting for Mr. Right and just enjoy Mr. Right Now.

Sexy, sweet (and possible player) Griffin may be her perfect, no-strings-attached match. He’s fun, gorgeous, and makes her laugh. So why can’t she stop thinking about Noah who, minutes after being trapped together outside the train’s loo, kisses Jordan like she’s never been kissed before? Never mind his impossible blue eyes, his weathered, annotated copy ofThe Great Gatsby (total English-major porn)…oh, and his girlfriend.

Jordan knows everything this year has an expiration date. Aberdeen is supposed to be about fun rather than waiting for life to happen. But E. M. Forster, Shakespeare, and mistletoe on Valentine’s Day make her reconsider what love is and how far she’s willing to go for the right guy.**

What I wouldn't give to go back to when I was college age and be able to study abroad, and in Scotland no less.

Jordan is trying to live outside her norm. She's not usually a risk taker and leaving everything she knows and loves to take a leap of faith. She meets Griffin on the train from London to Aberdeen, hes cute and flirty and just what she decides she's going to flirt back. He makes her feel like shes pretty and its fun. She also meets Noah on the train. While they are stuck in a small space, he kisses her and she is dumbstruck. She feels more from that kiss then she does the flirting with Griffin.

She figures she's not going to see Noah again so she and Griffin start to see each other. When she sees Noah though she realizes that she has a whole lot of unresolved feelings for him, but he's got his own secret. One that derails all thoughts she has for him.

This was an okay book. I didn't love the way Jordan acted about things. She's supposed to be a third year collage student but she acted more like she was a high school student sometimes. The love triangle element put me off a bit too. In the end I wasn't so horrified that it made me stop reading. I loved Elaina and Duncan. They added a great deal of comedy and relief to the story. In the end its a 3.5 rounded up for the supporting characters.