Turn Up the Heat 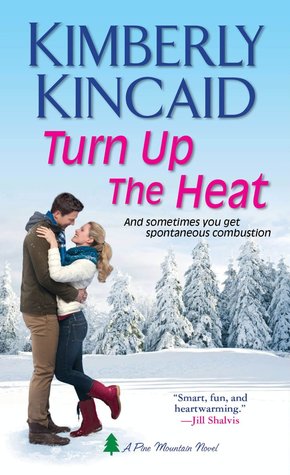 Turn Up the Heat by Kimberly Kincaid

There are only so many times a girl can hear those words before she believes that it is, in fact, very much her. Unexpectedly jilted by her locally famous boyfriend and haunted by a boss who makes Attila the Hun look like a lap dog, Bellamy Blake does what any self-respecting girl in her shoes would do. She rounds up her two best girlfriends and makes plans to get the hell out of Dodge.

But Bellamy's escape plan takes a nose dive on the side of rural route 164 when her transmission self-destructs, leaving her in the middle of a cell phone dead zone with nothing but her wits. Oh, and Shane Griffin, the hottest mechanic who's ever checked under her hood.

Yet this small-town man isn't all he seems. Can Shane and Bellamy prove that sometimes the most unlikely ingredients make the most deliciously sexy mix?**


I received this book as an ARC from NetGalley for an honest review.

Bellamy just wants to escape. Her boyfriend told the whole city of Philly that he was moving to a different city. Her friends called her asking if she was getting married and moving and she had no idea what they were talking about. As much as she thought that she was in love with him when he left she wasn't as devastated as she expected to be. She decides she needs a weekend away with her girlfriends so off they go to Pine Mountain resort. It seems though that the week from hell just keeps getting worse, because Bellamy's car breaks down on her way to the resort. She calls the only mechanic she finds and Shane comes out to check her car.

Shane stays to himself. He has friends but he likes working on cars. He's attracted to Bellamy but she's the exact opposite of what he wants, isn't she. If she is why can't he get her out of his head. Once he kisses her he really can't get her out of his head. He has secrets though, that he doesn't want to share. Why should he, Bellamy isn't staying in Pine Mountain.  Why should he tell her his secrets.

I really enjoyed the progression of their relationship. I thought that once Shane decided to jump in to something with Bellamy he was with her, he may of kept things from her but he was into her. I think in the end they both learned that they have to do what makes them happy and that their parents aren't the ones that are living their lives. Also it was nice to see that even though Bellamy was afraid of what her parents would think about her choosing to leave the job she had for a new venture they were behind her supporting her. Fantastic book and I look forward to the next in this series!